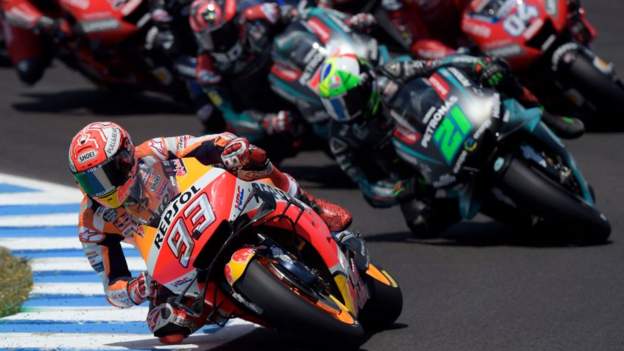 A revised MotoGP calendar for 2020 consisting of a minimum of 13 races, and a maximum of 17, has been announced with the season to start on 19 July.

Seven of the races will be held in Spain, including the first two at Jerez, with one in Barcelona, two at Aragon and another two in Valencia.

There will be two races in Austria, two in Italy and one apiece in the Czech Republic and France.

The season had been originally due to start in Qatar on 8 March.

However, that race has been cancelled because of the coronavirus pandemic, along with events in Italy, Germany, the Netherlands, Finland, Japan and Australia.

Last month it was announced that the British Moto GP, due to be held at Silverstone from 28-30 August, would not take place and it has not been included in the revised calendar.

As well as the 13 scheduled races, there could also be a further four – in the United States, Argentina, Thailand and Malaysia – and a decision will be made whether they take place by the end of July.

There could also be a further four races – Americas (Circuit of the Americas, Austin), Argentina (Termas de Rio Hondo), Thailand (Chang) and Malaysia (Sepang). These races, if they go ahead, will all take place between 22 November and 13 December. A decision on whether they are held will be made by 31 July.